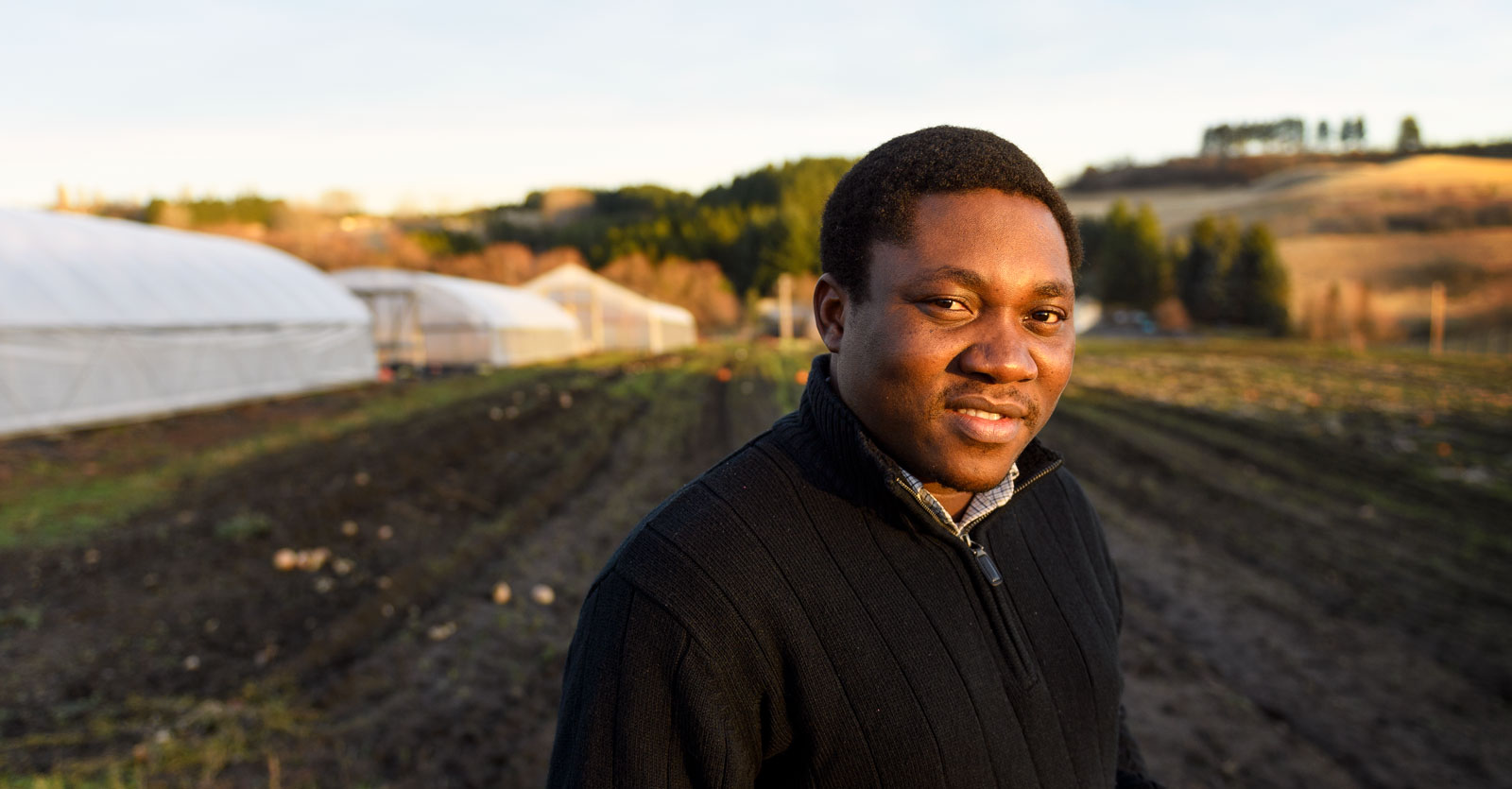 With a $100,000 award, doctoral student Cornelius Adewale hopes to revolutionize farming in Nigeria

When money was scarce, Cornelius Adewale’s grandmother sold her clothing, jewelry, and dishes so her family wouldn’t go hungry.

Yet Adewale’s household fared better than many farming families in their Nigerian village of Ilesa. Villagers struggled to raise cassava, cocoa, pumpkins, cotton, and kola nuts on rented plots of land. The less fortunate couldn’t harvest enough to pay the rent. They lost their farms—and with them the income and food needed to survive.

Adewale saw those neighbors turn gaunt and sickly from hunger.

Planting and weeding by hand, farmers in Ilesa produced a fraction of their land’s potential. Few knew about farming methods that could yield a bigger bounty.

Decades later, Adewale has devised a plan to help his native Nigeria fill its plate. The 34-year old Washington State University doctoral student is creating a smartphone app that will show farmers how to boost crop yields, so they can keep their farms and feed more people.

On the surface, his plan involves enriching soil. But at its heart, it’s about enriching minds.

“When I was growing up, I saw people working 14 hours a day who were still unable to pay expenses. I saw poverty,” he says. “What’s needed to liberate people from poverty is knowledge.”

The funds will enable Adewale to launch development of the smartphone app. Although many Nigerian farmers lack basic tools, most own smartphones, he says.

Using the app, farmers could simply snap a picture to assess the level of organic matter in their soil. Organic matter retains nutrients and water. More of it means the soil can produce more food.

The color of soil reveals its level of organic matter. However, color differs by soil type and location. Adewale’s app will identify the location of the user. Then a mathematical algorithm will match the color shown in the user’s photo with soil types in that region of Nigeria. In an instant, the app will discern soil quality. 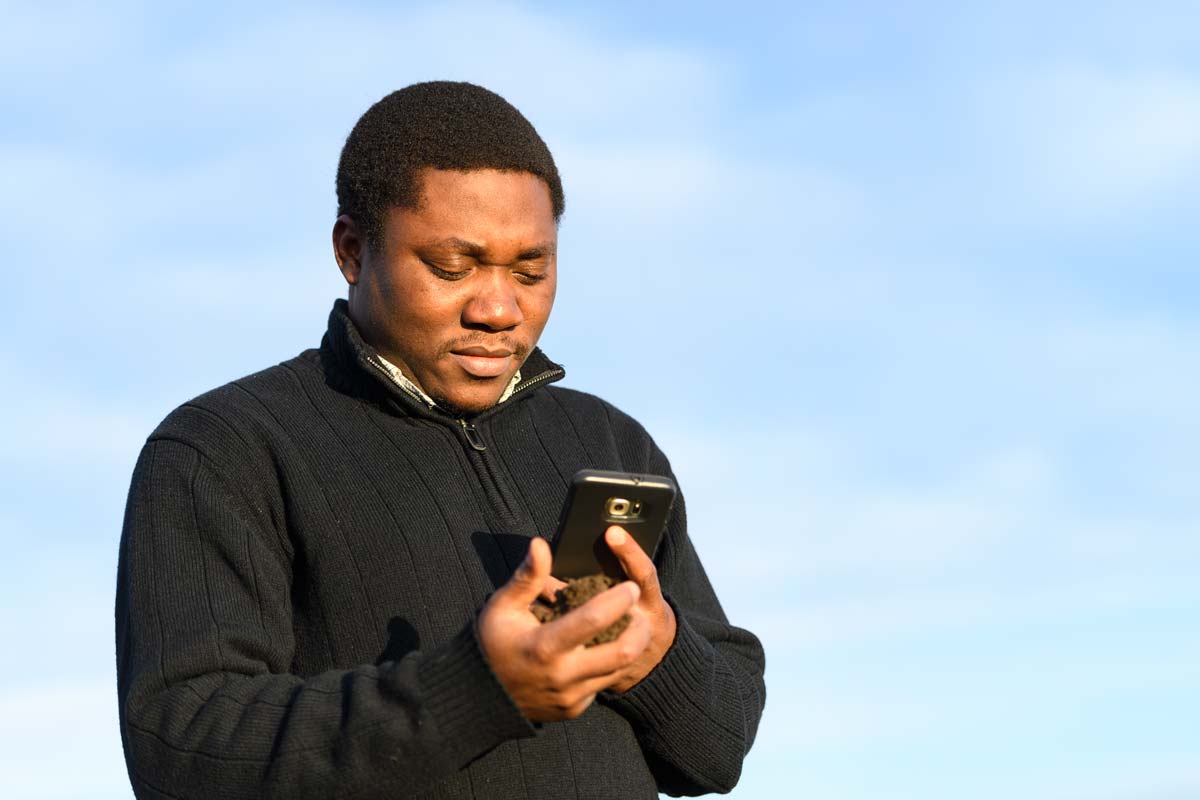 Adewale plans to develop a smartphone app that lets farmers snap a picture to assess how much organic matter their soil contains.

The app will also serve as an information hub. It can tell farmers how to enrich their soil. It can help them reach more buyers for their produce. It can connect them with one another in a virtual support group.

Adewale got the idea for a smartphone app while studying under Associate Professor Lynne Carpenter-Boggs, his mentor in the Department of Crop and Soil Sciences.

In 2010 Carpenter-Boggs formed a team that developed an internet tool to help organic farmers in the Pacific Northwest. Called OFoot—short for Organic Farming Footprints—the tool estimates the impacts of organic farming methods on soil organic matter and greenhouse gases. OFoot is available for public use.

Adewale joined the OFoot team in 2012.

“Cornelius’ training in agronomy and economics, along with his interest in decision making for environmental stewardship in farming, were a perfect fit for the OFoot project,” Dr. Carpenter-Boggs says.

As Adewale worked on the project, he discovered how an app could improve the way people farm. He imagined how a different kind of app could help Nigerian farmers.

“I want to give farmers the kind of information they need to boost their productivity,” Adewale says, “and at the same time, protect the soil.”

Soil is the lynchpin

When it comes to vanquishing hunger, soil management is key. The right practices help soil retain nutrients and water, so farmers can maximize crop yields and profits. 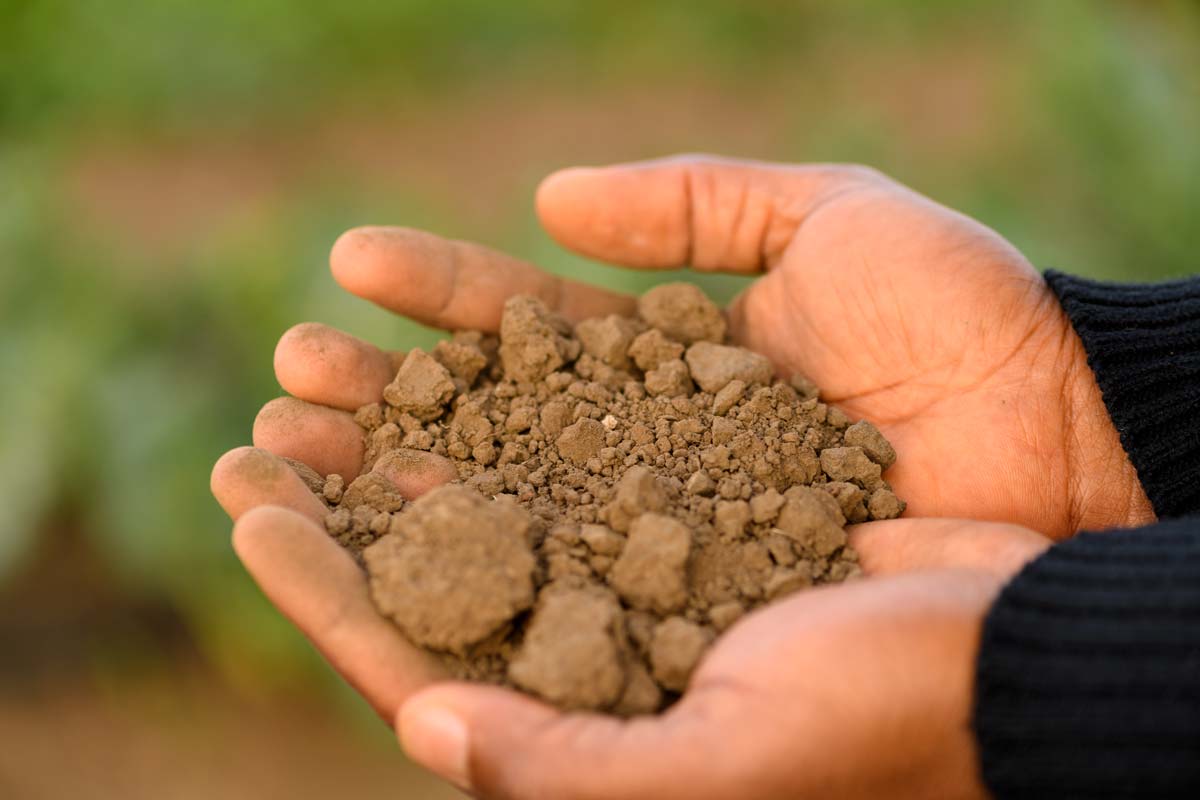 “So many environmental issues are tied to the way we manage soil,” Adewale says.

A different approach to soil management can put the genie back in the bottle.

“When we adopt practices that store carbon in the soil, it reduces the impact of climate change,” Adewale says.

Adewale began learning about soil when he was just 6 years old. He worked summers on the family cocoa plantation with his grandparents, who raised him. They would wake at sunrise and walk for two hours to reach their rented plot of land by 8:00 a.m.

There, tall cocoa plants shielded the family from the tropical sun’s scorching rays. Warm rain formed thick drops as it cascaded through the canopy. The puddles roused crabs and snails for Adewale to hunt.

The family worked a full day, planting, weeding, harvesting, and telling stories. Adewale and his grandparents would arrive back home around 8:00 in the evening. The next morning, they began the routine again.

“It developed a work ethic that became a part of me,” Adewale says.

It also taught him the importance of helping those around him. His grandmother urged him to dedicate his life to solving problems for the greater good.

Everywhere he went, he saw farms threatened by a dangerous mix of climate change and environmentally damaging farming methods.

Adewale scoured the Internet for solutions. Then came his Eureka moment—he realized that sustainable agricultural practices could transform the nation’s farms.

Adewale’s mind was made up. He would strive to advance organic farming in Nigeria.

Professional services company Accenture administered an aptitude test to about 700 soon-to-be graduates of his college. Adewale was one of just two to be offered a career-track position. The handsome starting salary was equivalent to about $2,000 a month.

Adewale had only $20 to his name. The choice was clear.

He turned down the job offer.

Instead, he used his $20 to start an organic farm.

“That’s what I believed in,” he says. “If I hadn’t done that, I would have regretted it.”

He planted vegetables, amaranth, and okra. He made his own organic fertilizer. He produced his own electricity by adapting an energy digester to power a generator.

“…We can begin to solve the problem of youth unemployment. At the same time we can start addressing environmental issues. We can start producing more food to feed more people.”

His methods worked. Within three years the thriving farm had grown to 1,500 percent of its original size.

Yet, Adewale recognized gaps in his knowledge. He didn’t know how to measure a farm’s environmental impact. He couldn’t empower others across Nigeria to create similar farms.

“I wanted to see how a better version of my farm could spread all across the country,” Adewale says. “Then we can begin to solve the problem of youth unemployment. At the same time we can start addressing environmental issues. We can start producing more food to feed more people.”

He searched online for top graduate programs in organic farming. Up popped Washington State University in his internet browser. With it were articles about WSU’s organic Smart Farm project, which explored sustainable food and energy production.

“My farm could become a smart farm. We could have more all across Nigeria. That was my thinking,” he says.

Adewale had saved about $6,000 from his farm proceeds—enough to pay for only half of a semester at WSU. Determined to continue his education, he took a huge risk. In 2011 he registered for the graduate program and boarded a plane to the opposite side of the world.

When he arrived in Pullman, he needed income immediately to pay the balance of his tuition. He beseeched his professors for a research assistantship. Without funding, he would be dismissed from the program. He would have to leave the country.

Dr. Carpenter-Boggs took a chance on Adewale. She gave him the opportunity to work in her lab.

The work ethic he had cultivated on the cocoa plantation stood out. Adewale maintained straight As in his courses while diligently tackling lab assignments.

Dr. Carpenter-Boggs awarded him a research assistantship the next semester. She remains his PhD supervisor today.

“When Cornelius first arrived at my office, what impressed me most was his practical farming experience and his bravery in leaving home so far away,” Dr. Carpenter-Boggs says. “It took a couple of years, seeing Cornelius seek out and take on leadership roles and thrive in them, before I understood his potential beyond academics.” 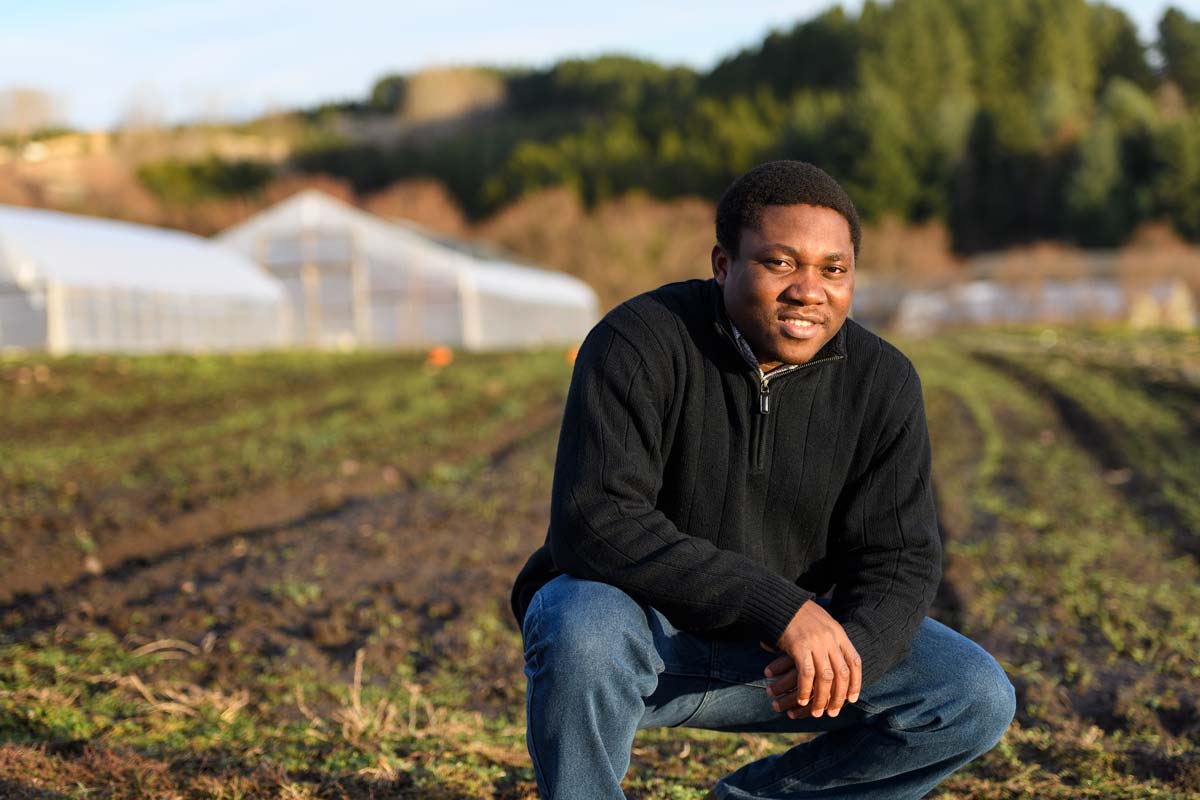 “I spend my time thinking about how we can solve practical problems that farmers are facing now,” Adewale says.

Adewale never expected his professors to proactively help him learn. In Nigeria, professors create exams “just to test you, not necessarily to assess your understanding,” he says.

“Here I can go back to a professor, ask questions, and they will answer you, they will help you to understand. They will give you a course outline. The library is open 24/7….I have no reason to get a grade of B, because I have access to everything I need.”

Adewale now holds a master’s degree in soil science. In a few weeks, he will defend his doctoral thesis and earn a PhD in environmental and natural resource sciences from WSU’s School of the Environment. His research explores standards used to assess the impact of organic farms on climate change.

In 2018 he will dive full-tilt into his post-doctoral project: developing the smartphone app.

Adewale’s app may help his fellow Nigerians at a critical juncture.

Nigeria is the world’s most rapidly growing nation. It will become the third most populous nation before 2050, according to United Nations projections, surpassed only by India and China. Food production must expand to avert widespread famine.

“Nigeria as a country has the potential to feed the whole of Africa,” Adewale says. “It is critical that we turn that potential into reality.”

Adewale hopes to end the knowledge crisis that cripples farmers’ productivity. An app that spreads information about better farming methods could help transform Nigeria into the continent’s bread basket.

Before he starts designing the app, Adewale will listen to Nigerian farmers’ concerns.

“At the end of the day, we want farmers in Nigeria to have a sense of ownership in the development process,” he says.

Adewale has often sought farmers’ opinions. As a graduate student, he reached out to farmers across Washington. He listened again when elected to the board of Tilth Producers (now Tilth Alliance), Washington’s largest organization of organic farmers.

“At the end of the day, we want farmers in Nigeria to have a sense of ownership in the development process.”

“Listening with humility” shows respect, he says. His participatory approach strengthens the sense of community among farmers. It does the same among his WSU colleagues.

Adewale’s altruistic mindset took shape long ago in the lush shade of the cocoa plantation, as he labored to help put food on the table. He recalls his grandmother’s lesson that we are all here to serve others.

He remains true to her doctrine: “You must dare to care.”