“All of it was just to get on the good side of my high school ag teacher… I think it really developed my love and passion for the career that I’m in now.”

When Arron Carter, the director of the Washington State University Winter Wheat Breeding Program, was in high school his agricultural teacher had a ’69 Corvette Stingray. Every year this teacher would let his favorite senior take the car to senior prom. Carter had never taken an agriculture class before, but he knew he wanted to drive that car.

“Well, if I’m going to be the favorite senior,” Carter said to himself, “I’d better start taking some ag classes.”

This natural curiosity heightened when he started school. Instead of forcing him to read a boring textbook or memorize random facts, Carter’s teachers would let him conduct his own research and find the topics that interested him. Along with his parents, Carter credits his science teachers as some of his biggest influencers.

“I got a lot of freedom to really do what I wanted to do,” Carter says. “I wasn’t stuck behind a book reading a chapter on some science thing I didn’t care about. My teachers let me explore.”

“I got a lot of freedom to really do what I wanted to do. My teachers let me explore.”

Carter’s first agriculture class was no different. In some ways, it was even better, he explains. The class required more applied research and gave Carter the opportunity to apply his love of math and science to real-world issues involving plants. He quickly found his passion.

“All of it was just to get on the good side of my high school ag teacher,” Carter says. “I think it really developed my love and passion for the career that I’m in now.”

It was a happy coincidence that his freshman advisor was also the wheat breeder for the university.

The breeder offered Carter work and for the first couple years he was hoeing out weeds and washing glassware in the lab. The work helped him learn more about plant breeding.

“I learned how to make plant crosses and how to collect data accurately,” Carter says. “And again, it all fostered my interest in plant breeding. Each year I got more and more interested in what they were doing.”

By the end of his undergraduate career, Carter decided he could work in plant breeding for the rest of his life.

Although he loves his career now, Carter admits the decision to work with wheat was a bit of a fluke. Prior to his acceptance to the University of Idaho, he hadn’t thought much about what kind of plants he wanted to work with. Luckily, UI’s location in one of the most productive wheat growing regions in the nation led Carter to his calling.

Wheat is a food staple globally. It feeds millions of people and is a hardy crop that can be propagated in most climates. And, with the help of wheat breeders like Carter, the areas in which wheat can grow are increasing.

The process of breeding new varieties of wheat has a prominent place in history. Humans began domesticating wheat about 8,000 to 10,000 years ago and specifically bred for traits like stronger stems, earlier maturation times, and non-shattering heads.

Nowadays, the process isn’t much different. The breeders just have different tools to help them make the right selections, Carter says. Developing a new variety of wheat is no simple task and requires breeders to consider the different growing environments around the globe.

“Both the goods and the bads have helped us learn how to make better varieties now.”

“You get so much variation from year to year on what the temperatures are going to be, or when spring’s going to come, or how much moisture falls from the sky,” he notes. “We want to make sure a new variety is stable across multiple environments.”

While there have been many success in Carter’s career, there have also been instances where a new variety just wasn’t successful in the field. Though some would call these varieties “failures,” Carter sees them as learning opportunities. They have helped him figure out what genes are susceptible to disease or environmental stress and exactly how to combine these genes to make a successful variety.

“I think all of the varieties, even the unsuccessful ones, have played a role in where we are today,” Carter says. “Both the goods and the bads have helped us learn how to make better varieties now.”

“Supporting research and discovery is one of the reasons I came to Washington State University to work. I think they give a lot of freedom to the researchers to explore things that are of interest to them, but also relevant to both the national and international levels.”

After earning his bachelor’s and master’s in plant science from UI, Carter sought further education at WSU. As he was finishing his Ph.D. in crop science at WSU, positions working with wheat were few and far between. At the time, most of the jobs in his field were in the private sector, which was much more interested in corn and soybeans. Carter faced the difficult decision to stick with wheat or move on.

“The nice thing about plant breeding and genetics is you learn the theory behind it, which can be applied to many different species,” he says. “So whether I was going to go into wheat, corn, or potatoes, I had all the background knowledge.”

When he started new job, Carter wasn’t fully aware the history of the WSU wheat breeding program. Founded by William Jasper Spillman in 1894, the program has had only six winter wheat breeders in its 120-plus years. When a wheat breeder arrives at WSU, he or she makes a career out of it. And that career seems to last long past retirement.

“I can learn from them about what they’ve done and then apply that to what I’m doing right now.”

“We have a lot of past plant breeders who are still at the University or still interact with the program,” Carter says. “It’s good to get their input, too. I think it has made me a better plant breeder because I can learn from them about what they’ve done and then apply that to what I’m doing right now.”

WSU also fosters an environment in which researchers share resources and equipment to ensure every scientist has what he or she needs to be successful, Carter points out.

“Supporting research and discovery is one of the reasons I came to Washington State University to work,” he says. “I think they give a lot of freedom to the researchers to explore things that are of interest to them, but also relevant on both the national and international levels.”

“I always joke around with the growers that really our research objectives haven’t changed over the 120 years that we’ve been breeding wheat at WSU. We breed for high yield potential that’s economically beneficial for a grower and that’s going to be sustainable in the long term.”

When creating a new variety of wheat, Carter usually focuses on specific factors like disease resistance and tolerance to environmental stress. However, these factors are just small steps toward a much larger end goal.

“I always joke around with the growers that really our research objectives haven’t changed over the 120 years that we’ve been breeding wheat at WSU,” he says. “We breed for high yield potential that’s economically beneficial for a grower and going to be sustainable in the long term.”

But, according to Carter, there are a lot of different ways to go about ensuring high yield potential. In the Pacific Northwest, wheat growers always face the double threats of fungal disease called stripe rust and drought.

“Everything we grow is based on whatever falls from the sky,” Carter explains. “The plants have to be pretty resilient and be able to take advantage of the moisture available. If moisture doesn’t come, they have to be able to withstand some of the drought stress.” 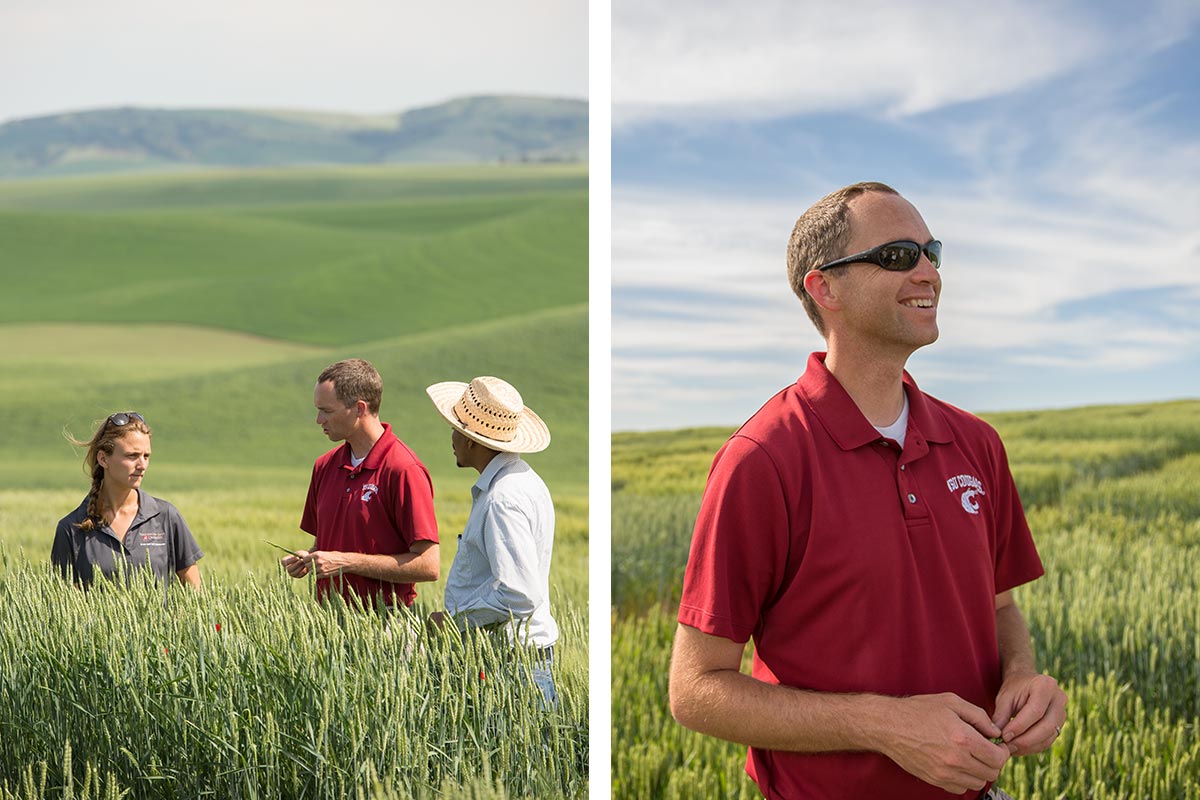 To give wheat disease resistance and drought tolerance, Carter and his team need to understand exactly what in the plant’s DNA creates resistance. First, he identifies DNA markers within known disease resistant wheat varieties, and then uses this information to screen other varieties for resistance, similar to how medical professionals screen for breast cancer. This helps him eliminate non-resistant varieties, saving time and resources later in the process.

“If I can use DNA markers in the lab, I can screen thousands of lines at a time. It’s more cost effective, more efficient, and I only take out to the fields the lines that I know have the desired traits,” Carter says.

Field screening and testing is often conducted in local cooperating farmers’ fields, making the relationship between the wheat breeders and growers mutually beneficial. This relationship also helps breeders understand exactly what the grower needs from a new variety, he says.

To Carter, the WSU breeding programs are more of a collective rather than stand-alone programs—a collective made up of breeders, scientists, growers, and consumers. So when the programs released their 100th variety, the decision on how to celebrate involved everyone. A spring wheat breeder suggested naming it in honor of the very first wheat breeder, William Jasper Spillman. There already was a variety named Spillman, so the group agreed to name the new variety Jasper.

“I didn’t come from a farming background. I wasn’t raised on a farm or anything like that, a lot of my colleagues weren’t either. It’s just that interest in plants that brought us to this field.”

Working at WSU also provides Carter with numerous interactions with students. However, just as  he himself learned, the field of plant sciences is big, student opportunities in crop science are abundant, and finding a niche can be daunting. So when a student joins the team, Carter and his colleagues strive to help the student find his or her passion.

“We really want to talk to the students first and get a sense for what their interests are, what project might fit them best.”

“Although we may have certain projects in mind when we recruit a student, we really want to talk to the students first and get a sense for what their interests are, what project might fit them best,” he says. “Whether they want to focus a little more on the applied research and be out in the field or they’re more interested in the genetics side of it and want to be in the lab.”

Students can pursue academic research, the private sector, non-profits, and more. With this in mind, Carter and his team tailor internship experiences to fit the students’ interests. Their goal is to provide useful hands-on learning opportunities.

WSU attracts students from all over the world, including China, Ethiopia, Japan, and elsewhere. “Now is really one of the best times to get into the plant breeding and crop science fields,” Carter says. “There’s a lot of investment in both public institutions and private companies in crop science right now. Even the students who are undergrads and just going out with bachelor’s degrees, all of them have been able to find jobs they’re happy with.”

Demand is currently high for students with crop and plant science educations due to a global need for more plant breeders. The world needs to figure out how it’s going to feed a growing population. In the past students have avoided agricultural fields because they thought agriculture meant working on a farm. They’ve quickly learned plant science is much broader than that.

“I think as we’ve educated them more, they understand what agriculture-related fields are,” Carter says. “Now we’re seeing a lot more students coming into the ag field.”